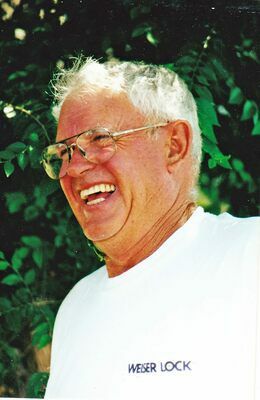 Ray was born to parents Lewis

Colo. Ray was the second of four

children, with an older brother,

and a younger sister and brother.

Ray passed peacefully in his sleep

in the early morning hours of

Ray is preceded in death by his

and his beloved wife Elva DeEtta

Ray is survived by his sister

nephews and friends too numerous

At the time of his birth, Ray’s

family was living and farming in

of Springfield. Around the midforties, the family moved to

southwestern Kansas for a spell,

relocating to the Springfield area

referred to as “the family farm”

in athletics and FFA as well as

one boy, all named above.

To support his new bride,

Ray owned and operated the

in Springfield. With an eye to the

with Plateau Natural Gas Co. as

a service man. Ray would stay

in the natural gas business until

through his tenure (Northern NG,

with it and retired as a Regional

Nebraska, Kansas and others.

Ray’s career led his family on a

All three girls were born in

Lamar, before the family moved

to Burlington, where the fourth

child and only boy was born. As

within the gas company, the family

moved to Flagler, then Cheyenne

Wells, then Limon and finally

back in Burlington. While there

will always be deep family roots in

and Dee ultimately adopted and

Ray’s restless nature and desire to

help and serve others led him to a

the City of Burlington, where he

was tasked with the maintenance of

had a great passion for working

with his hands, and he especially

took joy in helping others. Ray

was loved and respected by the

people he worked with and for. It

was a good fit for all.

All who knew him, knew that

Ray was always an avid sportsman.

In his early adult life, he loved

softball for several years. He had

a marked passion for individual

sports such as golf and racquetball

as well. He participated in

the years and enjoyed playing both

at every opportunity. It was not

unusual for him to golf twice a day

when he had the opportunity after

In addition to all things sports,

Ray always took pride in his

maintaining his yard and gardens.

His yard was always well tended,

and often earned him and Dee

accolades and the occasional

award from the local garden club.

Burlington home until the end,

his final time was spent in a

in Westminster, Colo., where

he was well taken care of. The

very convenient for visitation, as

all Ray and Dee’s children and

reside in the Denver area. This is

of great comfort to his family, as

we know that he was well loved,

right up until the end. We do have

comfort in the fact that his passing

was peaceful and painless.

pending at this time.