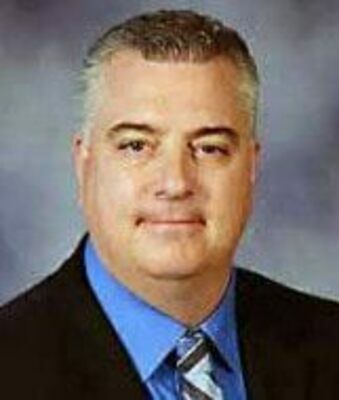 Eric G Weber, 49, of Lincoln, Neb. passed away Friday, Jan. 13, 2023 at Bergan Mercy Hospital in Omaha. He was born June 8, 1973 in Hugo, Colo. to Donald Weber and Betty Searcy Weber. He was baptized July 22, 1973 at Zion Lutheran Church in Limon, Colo. He lived with his parents in Limon until he moved to Wilber, Neb. with his mom in second grade. Eric graduated from Wilber Clatonia High School in 1992. He played basketball at Doane College and received his Bachelor’s degree in Education in 1996. He earned his Master’s degree in Educational Leadership from Doane in 1999. He completed his Doctorate in Education Administration at University of Nebraska Omaha in 2012. Eric married Carrie Blome on May 18, 1996 at St. Mark’s Lutheran Church in Lincoln, Neb. Their first daughter, Hope Christine, was born on March 8, 2000. Eve Brienna was born December 31, 2002. They lived in Lincoln and Eagle and then moved to Omaha in 2004 where they attended Divine Shepherd Lutheran Church. Zoe Madeline was born December 5, 2008. They moved to Lincoln in 2013 and attended Christ Lincoln Church. Eric was a lifelong educator known across the state for his passion for kids, teachers and administrators. He began his career teaching 6th grade in Syracuse, Neb. and then taught 6th grade at Lux Middle School in Lincoln. He was a middle school principal at Conestoga Schools in Murray from 2001-2004 and at Westside Community Schools in Omaha from 2004-2008. He was the Assistant Superintendent for Human Resources at Westside Community Schools for five years before becoming the Associate Superintendent for Human Resources at Lincoln Public Schools in 2013.

He was actively involved in many professional and community organizations. He volunteered his time with Doane College helping future teachers and administrators by speaking, doing mock interviews, and providing guidance. He received the Doane University Distinguished Education Alumni Award in 2011. He was a certified Gallup strengths coach and gave many training sessions on how to best leverage your personal strengths. Eric was active with the Nebraska Association of School Personnel Administrators and was the Executive Board President from 2014-2016. He was on the board of directors for the Nebraska Educator Health Alliance and the Continuum EAP. He was a Teammates volunteer and was so proud of his mentee, Tony. He was on the board of directors of Make a Wish Nebraska, servicing as the board chair in 2014-2015. He was on the Cedars Home for Children, Youth Services Board and Foundation Board. Eric is survived by his wife, Carrie; daughters Hope, Eve, and Zoe of Lincoln; father Don (Bobbie) of Tucson, Ariz.; parents in law Roger & Trudy Blome of Clatonia, Neb.; brothers Greg (Terry) of Lincoln and Kirk of Grand Island; brother-in-law Todd (Melissa) Blome of Lincoln; and many nieces, nephews, and cousins. Eric was preceded in death by his mother, Betty Searcy; his brother Scott Weber; and his niece Brienna Weber. The family greeted friends and relatives on Monday, Jan 16 from 1-3 p.m. at Roper & Sons South Lincoln Chapel, 3950 Hohensee Drive. The funeral was held at Christ Lincoln, 4325 Sumner St. on Tuesday, Jan. 17 at 1 pm. Memorials will be given to Make a Wish Nebraska. Their daughter Hope has had many medical challenges in her life and she received a wish in 2011. The family went on a trip to Harry Potter World at Universal Studios and Disneyworld. After that experience, the family was deeply impacted and began volunteering at Make a Wish by speaking at events and being on the board of directors. Your gift to Make a Wish would be a great honor to Eric. Condolences online at Roperandsons.com